This is your definitive guide to understanding the difference between overmolding and insert molding.

In short, overmolding and insert molding are both subsets of a manufacturing process known as injection molding. These two subsets contain the same molding process of injecting plastic resin into a mold cavity, but they have one minor difference that people often ignore: all overmolding is insert molding, but not vice versa.

Now, to understand this better, we break it down below:

If you were to read the Wikipedia page on injection molding, you would have a basic understanding, but it does not go into depth. So, we will pick up where they left off.

The injection molding process begins with raw plastic resin, known as thermoplastic, being dumped into a hopper. This resin is then heated typically to between 300° - 650° Fahrenheit where it melts and is injected into a steel mold.

These molds contain cavities that have been carefully manufactured to meet the specific designs of the desired product. The melted thermoplastic fills the cavity and quickly cools and hardens to create a finished product.

The most common industries to utilize this form of molding is the healthcare industry for medical injection molding, aerospace/defense, and consumer products such as guitar picks and scissors.

Pictured below you can see the comparison between an empty mold cavity (left), and one filled with hardened thermoplastic formed into a finished product (right). 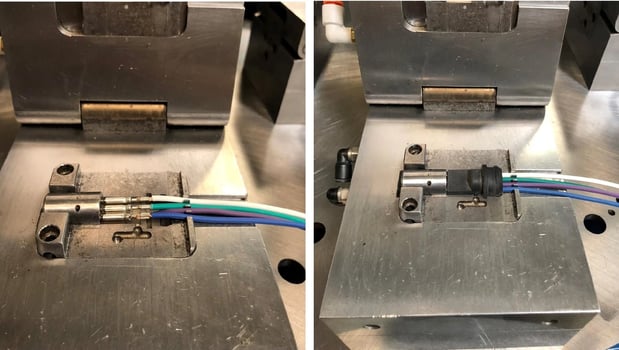 In an article by the New York Times you can see how insert molding has taken a hold on major consumer products, like virtual reality.

To eliminate confusion, we will describe the two processes separately and then bring them together.

At times, the cavity itself will produce a solid plastic part as the finished product (both examples pictured below).

Overmolding is often where people get confused because of the many different definitions published on the topic. To keep this simple, we will use the definition that is the most broad and inclusive.

Overmolding is a process that combines multiple materials into a single product.

A basic example of overmolding is pictured below. You can see in the left picture the green plastic was insert molded to the metal screwdriver. On the right, the black elastomer (rubber molding) was then overmolded to the substrate to create a soft grip. 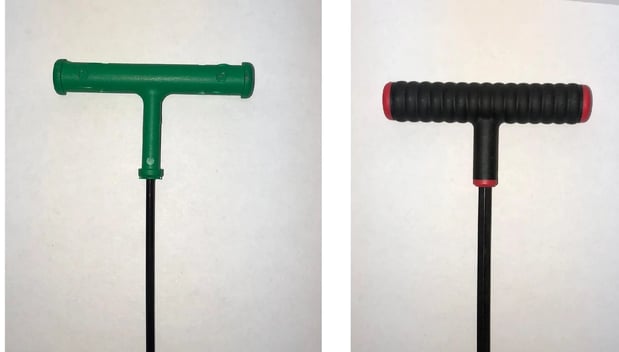 From these examples, you can see that overmolding and insert molding are actually very similar processes. In fact, all of the pictured examples can fall into the insert molding category. Insert molding is actually a broader term than what people use it as.

Shops are often looking for

because it typically has

The main confusion happens when people believe the myth that overmolding can only be done when molding an elastomer or other thermoplastic over another insert molded part.

For example, pictured are some connectors that have several small wires that need to be contained inside a housing. By definition, molding these parts would be overmolding since it takes multiple parts to create a finished product.

However, because the individual wires were not made via insert molding (they are extruded), many consider this product to be insert molded, not overmolded.

Eventually, with so much dispute and confusion, it becomes more a matter of personal terminology rather than an exact definition (which is why overmolding vs insert molding became a large topic of discussion).

To prove the diversity of terms used, some shops may prefer to manufacture the screwdriver referenced above as “injection molding with a secondary operation” as alternatives to "overmolding".

Ultimately, it is still an insert molded product.

Using overmold as a descriptor can often clarify operations, but if used too loosely it can cause confusion.

Some of the more challenging aspects of medical device manufacturing c...

The mold manufacturing process for injection molding is referred to as...

In 1972 Bill Walter had just graduated high school and was hired to wo...